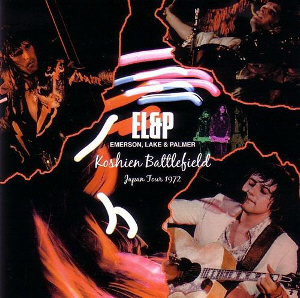 Emerson Lake & Palmer visited Japan only once during their halcyon days in the seventies, and the Rock Explosion ’72 trek co-headlining with Free was only two dates in Tokyo on July 22nd and Osaka on July 24th. This short tour was right in the middle of a long tour of North America and would return to the states right after for a show on Friday, July 28th in Long Beach. Read The Riot Act is a prior release of this show on the obscure label All Of The World (AOTW94004/005).

Koshien Battlefield is a new audience tape that contains the entire show plus riot and closing announcement. There is a cut in the tape one minute in “Aquatarkus”. Due to the enormous sound system the band used the music is clear and detailed despite the distance. Emerson’s between song announcements are a bit low in the mix and are hard to hear but the music is loud enough. The band often mentions this show in recollections about their career, usually to express how popular they were in the early seventies.

Their constant touring in the early years ensures this being a hot show and “Hoedown” is played with fire. “Tarkus”, which is one of the best progressive rock epics, contains a big blunder during “Battlefield”. Keith loses the time signature and continues playing as Lake sings the “every blade is sharp” line, which is usually sung a capella. Palmer, who always took his cue from the keyboard, also continues on until they stop in time for the singer to sing “Epitaph”. “

Aquatarkus” was the time for Emerson to play all sorts of improvs on the synth and in this show he engages in serious moog figures. The audience becomes very loud during “Pictures At An Exhibition” especially during “Great Gates Of Kiev” which continues during “Rondo”. The cheering drowns out the music during most of the song and the drum solo becomes more faint until it stops and all that is heard is the cheering. The announcer speaks over the PA in Japanese, there is some booing and the tape ends.

It is definitely an interesting document and sounds much better than the audience source from the Tokyo show. There is some film of the event, of which two scenes, from the very beginning and drum solo, appear on the Beyond The Beginning official dvd. Perhaps the entire film will someday surface?

Mindwarp include as a bonus fragments from the soundboard of the Tokyo show on July 22nd. It contains the entire “Tarkus”, “Pictures At An Exhibition” (with Lake’s “raindrops keep falling on my head” intro), and five minutes (out of almost nineteen) of “Rondo”. It is excellent quality and one wonders where they found it? Koshien Battlefield is a rare silver release on the Mindwarp label (who usually produce progressive rock cdrs), and is an offshoot of King Stork. (The cd themselves have King Stork Records (KSR-043/044) printed on them). Any ELP release on silver is great and this is one of the better titles to surface.