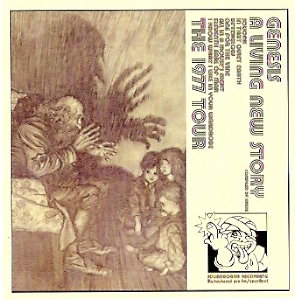 British Biscuit Intro, Squonk, …In That Quiet Earth, Afterglow, One For The Vine, All In A Mouse’s Night, Eleventh Earl of Mar, I Know What I Like, British Biscuit outro

A New Living Story contains one of the many radio broadcasts of Genesis’ Wind & Wuthering tour in 1977. Since its broadcast and release in the late seventies it has always been attributed to the January 2nd show at the Rainbow Theater. The first broadcast on the BBC was on March 20th of that year. The tape is obviously edited for broadcast and no other source for the January 2nd show has surfaced to corroborate the claim.

Genesis played three consecutive dates at the Rainbow between January 1st – 3rd. An audience tape exists for the first date and has been released as Wot Gorilla Lillith? on Highland (HL329/330) and a complete soundboard surfaced for the January 3rd show. There is no evidence on the tape this comes from the January 2nd show but with the inclusion of “All In A Mouse’s Night” we can be sure is comes from the British leg of this particular tour (that song would be subsequently dropped).

This recording first surfaced on vinyl in the seventies under the title A Living Story: The 1977 Tour (Big Thumb PG 1300) with two separate covers. The first edition has a picture of the band standing on a street corner and the repressings have the better-known illustration of the old man telling a story to the children. “All In A Mouse’s Night” was mistakenly listed as “Afterglow”.

There was also a compact disc release called Live At The Rainbow with no label. The sound quality has always been very good but this release by Siréne is definitely a huge improvement. The stereo separation sounds much more natural and Siréne like to emphasize the lower frequencies making it sound much more rich and enjoyable.

Siréne also included the British Biscuit introduction, station break in the middle (but no commercials) and the closing credits to give the whole radio broadcast feel. Hopefully someday, with many other Genesis soundboards surfacing the complete show will also come to light.

Given the time limitations of the radio the set list is heavy on numbers from their recently released album. Only the opening “Squonk” and closing “I Know What I Like” are not from Wind & Wuthering. This broadcast might have been many people’s introduction to the new album and it is unusual that the “In That Quiet Earth”/ “Afterglow” sequence would be the first numbers broadcast.

“Your Own Special Way”, which was played earlier in the set list (and assumed played in this show) might have been a better introduction since it was the first single off of the album. The broadcast also contains a very rare version of “All In A Mouse’s Night” that would be dropped from the set list never to appear again and in general it t is a plus to have great recordings of this album’s instrumentals to hear how technically proficient they are.

Siréne use the cover art for the second edition of the vinyl with the amended New Living Story. The illustration is perfect for the material. This is limited to three hundred numbered copies and is definitely worth having.