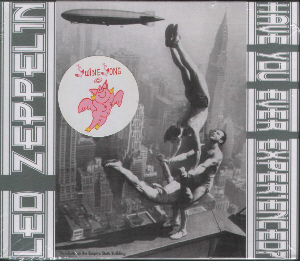 Disc 4: What Is And What Should Never Be, Moby Dick, Whole Lotta Love (includes Boogie Chillun’, Dust My Broom, Cumberland Gap, Bottle Up And Go, Lawdy Miss Clawdy, Cinnamon Girl, Some Other Guy, The Train Kept A Rollin’, King Bee, CC Rider, Baby What Do You Want Me To Do, Honey Bee, The Lemon Song), Out On The Tiles, Communication Breakdown/Gallows Pole, The Girl Can’t Help It/Talking Bout You/Twenty Flight Rock, How Many More Times (Cadillac, Blueberry Hill)

The latest in the obscenely limited edition (75 copies of both the red and white covers) deluxe packaged box sets from Tarantura people.  These two concerts by Zeppelin are their Madison Square Garden debut and the finale of their autumn tour.  The cultural import of these are clearly seen in the rare press conference the previous day as Zeppelin’s ascendancy over the Beatles (as seen on the Zeppelin DVD released last year) occurred around this time.  Further meaning is given with Jimi Hendrix’ death the previous day and which Plant speaks about on stage in both concerts.  The afternoon show was an almost sell out while the evening was a complete sell out.

Discs 1 & 2 are the first release of the afternoon show in about seven years.  The previous releases include American Woman on TDOLZ and Maui Wauwi on Scorpio.  The tape is good, distant from the stage but quit listenable, probably taped in the blue section at the Garden.  The tape begins in the guitar solo of “Immigrant Song”.  The tapers found a nice location but were kicked out by security during the second verse of “Heartbreaker” (“I didn’t say you could stay here” we clearly hear on the tape).  We pick up again in the “Heartbreaker” solo and have minimal intrusions (except for the guy selling binoculars during the violin bow solo in “Dazed & Confused” — how annoying!)  The tape goes through “Moby Dick” and Plant’s introduction to “Whole Lotta Love”.  The show is completed by a second source that is several notches below the first, being more muffled and distorted.  Overall a nice, professional show from the band.

Discs 3 & 4 features the source for the evening show that surfaced in January.  It caused quite a stir when first released on the Internet and is still considered to be one of the most important tapes to surface since the Physical Graffiti outtakes from 1997.  Previews and rarely played songs highlight the evening show and Zeppelin celebrating the end of a legendary tour.  The tape was made on the floor, close to the stage, and is one of the best to surface from this era.

Tarantura has done a nice job with this release.  The speed issues that caused concern for both shows have been addressed (the afternoon ran a bit slow, the evening a bit fast) although the criticisms are exaggerated.  The difference is so minimal that it really doesn’t matter and they all sound fine.  Devoid of the heavy handed mastering of previous releases, Have You Ever Experienced? is well worth the asking price.