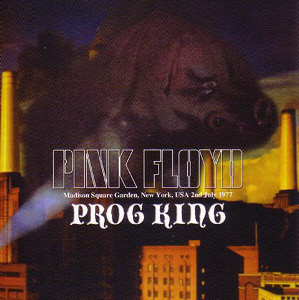 Prog King documents the second of four Pink Floyd concerts at Madison Square Garden in New York.  This occurred in the final week of their long six month long tour promoting the new Animals LP and is surprisingly their first visit to the Garden.

Occurring during the fourth of July holiday weekend during a sweltering summer in the city along with marijuana being decriminalized in New York State were all factored in to the electric atmosphere captured on this tape.  Throughout the show there are very loud bangs (and I mean LOUD), the most noticeable of which occur at 2:53 in “Sheep”, at 1:44 into “Dogs” and several at the end of “Pigs (Three Different Ones)”.

Siréne’s release is a two-source mix.  The first source has a long history dating back to the vinyl era.  “Dogs”, “Pigs (Three Different Ones)”, and the Wish You Were Here suite appeared as Caught In The Crossfire (Pharting Pharoah 13153 A/D), and was repressed on The Live Biography:Volume 4 – Have A Cigar on International Records (RSR-215).

The International Records people produced the first CD reference to this tape in 1989 by releasing the Wish You Were Here suite on Caught In The Crossfire on Neutral Zone (NZCD 89017) along with “Fat Old Sun” from the 1971 BBC session.  The Wish You Were Here material was re-released the following year as Welcome To The Machine on The Swingin’ Pig 1990 (TSP-CD-061) and New York Live 1977 on Welfare Pig (WP203) and in 1992 as Live USA on Imtrat (imt 900.051).

A more complete tape surfaced on the fan produced ROIO In The Grassland Away.  This was sourced from a DAT clone of the cassette master and utilized a second tape for the second encore “Us & Them”.  The sound quality of both sources is phenomenal.

“Us & Them” sounds a bit more hissy although not at all distracting.  The first couple of notes of “Sheep” are cut, there is a tape flip after “Dogs”, and the taper bumped into the record button at 12:30 in “Shine On You Crazy Diamond (parts 6-9)”.

The sound also becomes a bit unstable at the end of “Money”.  All are very minor blemishes on what is a superb tape.

The second half of the show is very good with an extended piano solo at the end of “Wish You Were Here”, and at the end of “Shine On (parts 6-9)” both Gilmour and Snowy White play fine solos during the jam in the which as always ends with Wright’s keyboard tribute to a number of early Syd Barrett songs.

Siréne as usual have done a fantastic job with the tape and this show certainly deserves it.  As with Live In Rotterdam and Wolfsschanze they use very thick glossy inserts that are very classy.  The cover illustration is also very interesting with the black pig over the Battersea Power Station.  Hopefully we’ll see definitive versions of the other three New York shows in the New Year.