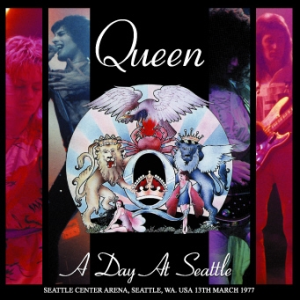 Queen’s final show on their US Day At The Races tour in Seattle is perhaps their most bootlegged tape.  It is a great sounding recording of almost the entire concert.  It surfaced on vinyl soon after the gig on the famous Duck Soup (Rodan Records SLA 0007) with about half of the show.  P.N.W. Live is another well known vinyl title with this show which was copied under Pacific North Western and as Mania, with a pic from the Game era on the front cover.

The earliest Queen bootleg CDs also documented this tape with two releases in 1991.  In The Lap Of The Queen (Chapter One CO 25153) and Saturday Night’s Alright For Fighting (Buy or Die BOD CD 214), both copied from vinyl.  P.N.W. (Outside 002), the semi-legal Live USA (IMRAT  IMT 900.076) and Live In USA 1977 (HL CD 014) are other well known titles.  Duck Soup (SLA 007) was also included in a batch of Queen silvers released in 2000 from Japan which copied the original (scratchy) vinyls and packaged in handsome duplicate-LP covers (other titles from these people include King’s Favorite, Crazy Tour and Queen’s Last Stand 1985.)

While all the compact disc releases were sourced from vinyl, the master cassette surfaced recently and is the source for A Day At Seattle on Wardour.  Since tapes from this tour are scarce it is valuable just for existing, but the sound quality makes it very desirable.  It is clear and enjoyable with considerable dynamics.

And the performance is inspired.  Touring with Thin Lizzy, this was a tour which brought them a step higher in popularity and saw them play in Madison Square Garden in New York for the first time.  Seattle was the final US show and with the wild audience comes across as inspired.  The set they play is the standard one with an emphasis upon the new album including the taped intro leading into “Tie Your Mother Down.”  The following two songs, “Ogre Battle” and “White Queen” are two oldies that would soon be dropped from the live act and the audience sounds a bit impatient during the slower number.  Freddie seems to notice too as he remarks, “Thank you for listening patiently through that song.”

“Somebody To Love” was the first single off of the album, released the previous November.  It was a bigger hit in the UK where it peaked at #2, but it spent fifteen weeks on the charts in the US peaking at #13.  Afterwards Brian May gives his greeting, saying, “I hope you’re all sitting comfortably, because we’ll have a lot of different things for you. Thank you for making that one a hit up here. We appreciate that. Ok, we’re gonna have some fun. We’re gonna do a medley of some things which we hope you’ll recognize. It begins like this.”

The medley, a feature of all but one of Queen’s tours, begins with “Killer Queen” and includes “The Millionaire Waltz,” “You’re My Best Friend” and ends with “Bring Back That Leroy Brown.”  This is perhaps the most uninspired of them all and doesn’t hold together well at all.  When they will go on to play Europe they’ll add “Good Old Fashioned Lover Boy” to the medley (a song never played in the states).  “Sweet Lady,” which followed the medley in many shows on this tour is dropped and they continue with “Brighton Rock” and May’s long guitar solo.  They play it straight with the return to the third verse instead of segueing into “Son & Daughter” like on previous tours.

“’39” is the first time the played an acoustic number on stage and Freddie makes a big deal about it afterwards, saying, “As you can gather, we like to try out the acoustic stuff and all the different styles that you hear on the albums. I just hope you don’t mind. I know we started off with rock and roll, but I think we’ve matured since then.”  He sounds almost apologetic, recalling his defense of Hot Space at Milton Keynes five years later.  “You Take My Breath Away” is a new song that is played only on this tour and live versions of it are special, especially in this sound quality.

May’s two epics, “White Man” and “The Prophet’s Song” are melted into one long number with Freddie’s vocal gymnastics int he middle.  “Keep Yourself Alive” has a short drum solo, one that would be expanded on in future tours and the set ends with “In The Lap Of The Gods…Revisited.”  “Now I’m Here” is the first encore and the rock and roll medley closes out the show and they cover Elton John’s “Saturday’s Alright For Fighting” for the first time live.  The closing “God Save The Queen” is cut from the tape.  A Day At Seattle is the first time this show has been released in almost ten years and the first time from the original tape in more than thirty.  This is an essential Queen performance and release.