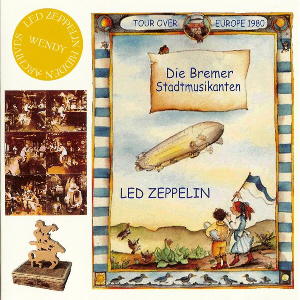 Venue : – June 23rd, 1980
Setlist : Disc 1: Train Kept A Rollin’, Nobody’s Fault But Mine, Black Dog, In The Evening, The Rain Song, Hot Dog, All My Love, Trampled Underfoot
Disc 2: Since I’ve Been Loving You, Achillies Last Stand, White Summer/Black Mountainside, Kashmir, Stairway To Heaven, Rock And Roll, Communication Breakdown
Review :
For Die Bremer Stadmusikanten Wendy chose the most obscure tape from Zeppelin’s most obscure tour. Most of the other shows in this era have seen multiple releases and have been fairly well documented over the past couple of years except for their show on June 23rd. This soundboard was released twice about a decade ago, in the four disc set Chein Noir on Antrabata and as Bremen on Tarantura, part of their complete 1980 tour set. Both of these have been long out of print, unavailable and very expensive. The tape is a very good and clear soundboard which emphasizes the upper frequencies and has mild distortion.
Wendy fixed the two gaps in the tape with soundboard from other show from the tour. From 4:56 – 7:52 in “Trampled Underfoot” they splice in one of the tapes, and from 9:03 – 10:54 in “Stairway To Heaven” they use the tape. The quality of the other tapes sounds much fatter than . The first edit is handled fairly well although the encore “Rock And Roll” is begins directly at the end of “Stairway”. It makes one wonder why they didn’t use the extant audience tape from this show to fix the holes. The label probably made an aesthetic decision although using audience tapes in soundboard recordings can work well if done right.
Whatever the case may be, this is one of the happiest shows from the tour. John Bonham especially is very vocal, yelling “Ah, see you tomorrow!” before Page introduces “Black Dog”. Plant teaches the audience the “Eye Thank Ewe” hand gestures before “In The Evening” and reports “It’s going to be a good night”. Bonham copies Plant’s “All rights!” and introduces “Hot Dog”. “It’s show time,” he shouts at the song’s conclusion. “All Of My Love” is one of the more troubling songs from this tour, with either Page flubbing his guitar lines or Jones playing the trumpet fanfare middle too fast, but on this night is played to almost perfection and sounds wonderful. “Trampled Underfoot” is dedicated to Atlantic Records rep Phil Carson, who is told to “get his shit together shortly or he will be trampled underfoot”. “Since I’ve Been Loving You” has a clear lyrical reference to “I’m Gonna Crawl” (“I’m gonna go by plane, etc”), which makes me wish they played that track instead. It would have sounded fantastic live. I’d have to say this is a good title that, if the edits are overlooked is worth having. (GS)