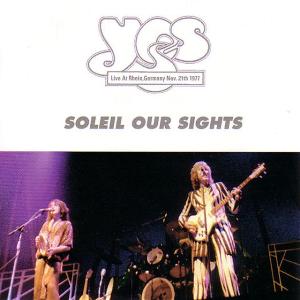 Disc 1 (66:52):  Firebird Suite, Parallels, I’ve Seen All Good People, Close To The Edge, Wondrous Stories, Turn Of The Century, Tour Song, And You And I, Going For The One

Yes toured extensively in Europe for Going For The One and with eleven shows spread out in just over two weeks, it represented their most extensive coverage of West Germany to date.  And these include their only visits to cities such as Nüremberg and Heidelberg.  The tape used for Soleil Our Sights is good but a bit noisy and distorted.  The audience are obviously very happy to hear Yes live for the first time and give them a rapturous reception.

There is a cut after “Wondrous Stories” which cuts out “Colours Of The Rainbow” (assuming it was played that night).  Also the very ending of “Awaken” is cut out.  The final three songs, “Roundabout,” “Nous Sommes Du Soleil” and “Starship Trooper,” do not come from the Heidelberg show but rather the December 5th Paris performance.  This isn’t noted on the artwork but it’s obvious since the sound quality changes  and the audience shout “aussi!!” over and over.  And Yes playing the end of “Ritual” would make more sense in a French city rather than German.

Highland’s neglecting to mention this on the artwork is most likely due to them getting a mismarked tape.  They’re usually not shy in adding bonus tracks.  Their other Going For The One German releases all have bonus material from other concerts.

After “I’ve Seen All Good People” they continue straight into the noises for “Close To The Edge.”  Most of the songs have long explanations and introductions, but “Close To The Edge” never does.  The band are content to let their epic speak on its own terms.  The Heidelberg audience clap along to the soft, dreamy “I Get Up I Get Down” section in the middle of the piece.  Some of the louder parts distort the tape.

But the distance in the recording works well for “Turn Of The Century.”  Although much shorter than “Close To The Edge,” it sounds much more epic and massive in this recording.  As it reaches a crescendo in the middle it takes on the feeling of an event rather than a simple tune in the middle of a rock concert.  It’s one of the highlights of the show.  Afterwards they play the tour song which is identical to the Nüremberg except Anderson says Heidelberg.

By the end of the show the “Awaken” prelude lasts almost four minutes and at times threatens to upstage the actual song which sounds majestic in this recording.  The tape cuts out before the final “high vibration” verse at the very end.  The encores are missing but were more likely “Roundabout” and “Yours Is No Disgrace.”

The rest of the tape is the wild Paris show.  This is the final concert of the long tour and the band play a rough, nasty version of “Roundabout.”  To please the French crowd they play an impromptu version of “Nous Sommes Du Soleil,” the final two minutes of “Ritual” from Tales From Topographic Oceans.  The tape has four minutes of “Starship Trooper” before cutting out.

Soleil Our Sights is a good release by Highland.  It is enjoyable to listen to and has some great versions of the songs.  With so many different shows from the Going For The One tour produced by the label this one can get lost in the shuffle.  However, since it is incomplete it is hardly an essential document to have.  It’s good for the committed Yes collector to hear part of an obscure show.  Otherwise there are better releases available.