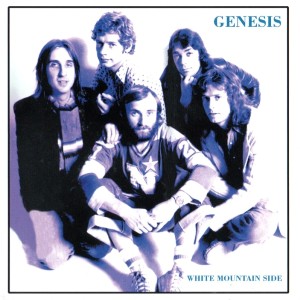 Disc 1 (59:18):  Dance On A Volcano, The Lamb Lies Down On Broadway, Fly On A Windshield/ Broadway Melody Of 1974, The Carpet Crawlers, The Cinema Show, Robbery Assault & Battery, White Mountain, Firth Of Fifth

Genesis played two nights in Toronto early on in the tour and these are the first two really big concerts after the departure of Peter Gabriel.  White Mountain Side offers the first and probably only silver pressing of the excellent April 1st Toronto gig on the A Trick Of A Tail tour in 1976.  The recording is very clear and powerful and picks up the atmosphere of the show beautifully.  The only negatives are the comments made by the tapers throughout the show (only between song commentary, never during a song) and two cuts on the tape.  The first is before “White Mountain” and the second before “Supper’s Ready,” both cutting into a Mike Rutherford introduction.

The show begins with a very slow and heavy version of “Dance On A Volcano” which sounds like their serious attempt at arena rock.  It sounds massive in this recording with a deep echo emphasizing Bruford’s drumming over the all-important Tony Banks keyboards.  “Every body find their seats alright?” Collins asks afterwards.  The Lamb Lies Down On Broadway medley is referred to by several different names on the tour.  In Toronto Collins calls it “Lamb Stew” and he gives a particularly passionate vocal to “The Carpet Crawlers.”

Collins’ Harry story features the character stealing the earnings from a factory in Victorian England, was caught but his lawyers spring him from prison “faster than you can say Patty Hearst.”  This is one of the better early versions of the piece.

Afterwards Rutherford gives the story about the climber finding and LP and “wipes off the dust from the album and sees it’s called Trespass.  And he wipes it off more and sees it’s by one of those English rock groups that comes to America.  And even from Toronto.”  Performing “White Mountain” was one of their more bizarre choices.  Although it is assumed they played the song in the early days, no recorded evidence exists.  The versions from this tour are the only live versions of that is an excellent live piece.  Someone by the recorder who is very knowledgeable of their history requests “Visions Of Angels” from the same album later on in the show.

Before “Firth Of Fifth” Collins introduces the “fifth member of the band…brought at great expense…Mr. Bill Bruford.”  Someone close to the recorder shouts “Boston sucks” referring to Bruford’s painter’s clothes which as the logo for the Boston Bruins hockey team on front.  There is a strange mastering fault at the end of the disc.  When the Genesis song ends, two minutes of Queen singing “Spread Your Wings” is audieble.  It doesn’t interfere with the music at all and is simply a curious mispress from the factory that makes this release distinctive.  (And I’m not sure exactly which Queen show it is although Brian May’s guitar solo is unique).

Steve Hackett introduces he song “Entangled” by saying “I hope you’re enjoying yourselves down there.  I see some friends from last night” and the song features “the Maria Callas school of synthesizer playing of Mr. Tony Banks.”  The song is hypnotic in its effect and the segue into the arena rock bombast of “Squonk” provides one of the more dramatic moments in the show.  The show ends with “Los Endos” with the perfect “It” and “Watcher Of The Skies” segue.  At the very end the taper says “this has been a CBC broadcast brought to you by JC Enterprises.”  It’s a cute bit of silliness at the end for a very good show.  This show’s obscurity is undeserved given the excellent sound quality.  White Mountain Side is an excellent Highland release worth having.