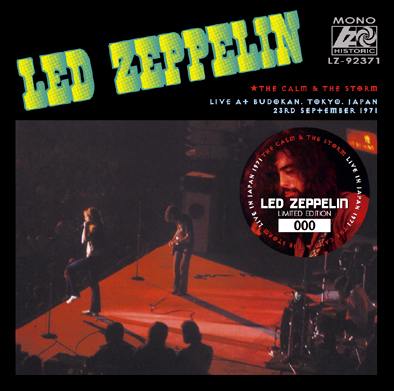 Forty one years after Led Zeppelin’s first tour of Japan a new tape source for the first night in Tokyo surfaced.  The new recording of the September 23rd Budokan show is the tenth unique source to be booted.  Unlike the amazing sounding sources utilized for Timeless Rock and Led Zeppelin’s Flying Rock Carnival, this tape is far from the stage and not as enjoyable.  Robert Plant’s song introductions are hard to hear over the wild din, and the music sounds fuzzy, competing with the general buzz of the crowd.

It’s also incomplete.  It starts at the beginning introduction and has the first forty minutes of the show, but is missing the acoustic section, “What Is And What Should Never Be,” “Moby Dick” and some of “Whole Lotta Love.”

The above mentioned titles are the definitive versions of this concert.  The Calm & The Storm is a good silver pressing for those who are obsessive completeists and who need to have each tape of the show.  It comes packaged in a single jewel case and the artwork is nice since it has various photographs from their first visit to Japan.