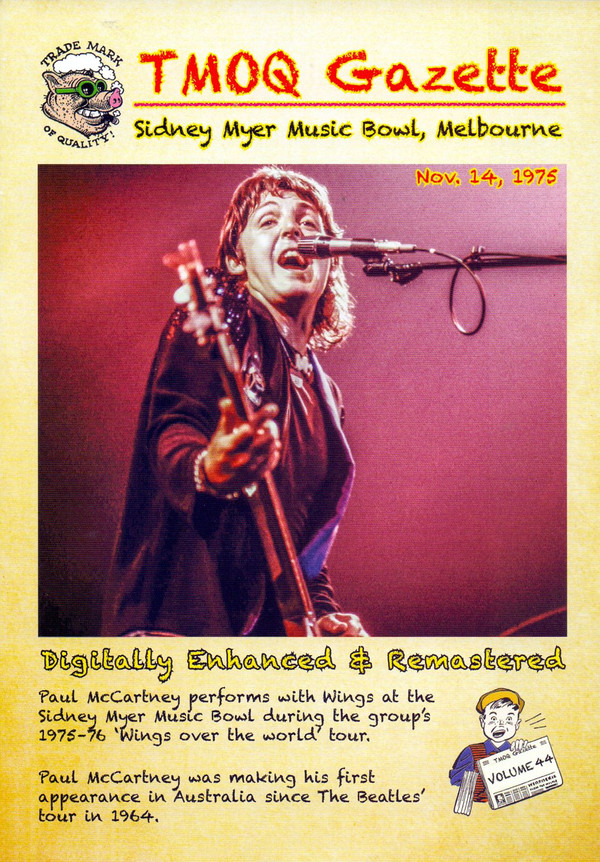 Recorded live on the 13th November, 1975, from the same tour that gave us, ‘Wings Over America’ (Albeit on a different leg), the ‘Wings over The World’ tour was on schedule in Australia. While it was performed in conjunction with the previous albums, ‘Band On The Run’ and ‘Venus And Mars’ (Giving a little innings with what was to be released on ‘Wings At The Speed Of Sound’), the tour was also the first time that Macca decided to look back and bring in some Beatles tracks – The swinging pendulum of an anticipated reunion hovering above each of the ex-Fabs heads, George had also famously revisited some of his Beatle era tracks in tour the previous year.

This show was recorded in full by Australia’s Channel 9, televisual broadcaster with an edited programme being played afterwards. When the intended Japanese / Asia tour didn’t eventually go ahead, the film itself was broadcast in Japan to say sorry to those who wouldn’t get a ticket. The show has seen release previously as an audience recording on ‘Wings Under The World’ on Atlasstar (WT75-014), partly on Orange’s ‘Highlights Down Under’ and more recently on No Label’s ‘Fly South’ (Which promised soundboard highlights but was the complete recording.)

In April 2019, ‘Thepetsounds4’ posted an upgrade of the complete video on YouTube – This was posted without the kanji subtitles that were present on the original Eastern broadcast so maybe have been lifted from the original Channel 9 recordings with a little close comparison between the two, this CD set appears to be from the same source (The first clue was a pinch in the audio after the line “ .. A lot like the one used by Jimmy Page ..” In ‘Rockshow’, there’s also a slight glitch in the sax solo in ‘Lady Madonna’, a tape wobble at the end of ‘Letting Go’, but you get the picture). While the audio had a little bit bass to it than the YouTube presentation, it’s obvious that there has been a little bit of neat remastering. Add the odd spot of static at a couple of the spoken word intros, they’re a pretty good approximation too. Frustratingly, the label still suggested that the show was taken from the 14th of November, instead. We now know that’s not the case.

As for the show itself, it’s easy to hear that’s it’s not the North American tour just yet – Indeed, despite rehearsals and a reasonably lengthy, initial UK tour, the band are not yet in the shape they’d form by the US leg. A little sloppy, certainly not as professional and the energy (Possibly due to the hot Ozzie weather) is lacking. That having been said, it’s a good show – Of course, it’s Paul, Linda, Denny and the band popping out some of the best pop-rock of the time, liberally sprinkling in some of Macca’s own Beatle tracks now he’s found the compunction to be able to face them again. There are some really fun elements like the extended fake out at the end of ‘Lady Madonna’ where the band really get behind their exuberance at being there, the skiffilly, ‘I’ve Just Seen A Face’ is really exciting to hear, the ever powerful, ‘Maybe I’m Amazed’ and a swaggering and pleading take on ‘Call Me Back Again’ but, again, it’s no “Wings Across America” (though you could imagine that this recording could be worthy of lighting her cigar)

The presentation is standard TMOQ gazette style – A lovely booklet featuring a write up regarding the, er, American tour, and Detroit taken from Rolling Stone magazine (With full credits), some wonderful full colour images and the application of the regular Peta and Meat-Free Monday advertisements.

Well worth picking up for your collection as it’s a great recording, a full show and obviously, much better than an audience recording. Don’t be fooled by the date however – The tape for the 14th, if it was indeed captured in full, has still to present itself.