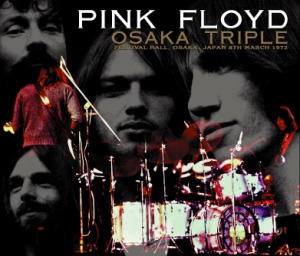 With the rate the Sigma label has been producing titles and how often they focus upon Pink Floyd Japan show, Osaka Triple (Sigma 44) would make perfect sense.  For the March 8th, 1972 show, there at least four tape sources in circulation.

Osaka Triple uses what is really the first tape of this show to surface on LP in the early seventies.  This is a straight transfer of the classic three LP Japanese set Pink Floyd (KP339-KP344).  It was originally released with three individual plain white covers and two posters placed inside a brown paper bag with sticker.

Later variations were released under the name Pink Floyd Japan 70-71, Live In Tokyo / Osaka 1972 and Tokyo Triple.  The bulk of the material comes from the March 8th, 1972 Osaka show, but “A Saucerful Of Secrets” is from the Osaka show on March 9th, 1972 and “Cymbaline” and “Fat Old Sun” date from their first tour of Japan on August 9th, 1971, also in Osaka.

The sound quality is, compared to the others, very muffled and dull and bearly enjoyable.  It’s existence on silver disc appeals only to the most diehard Pink Floyd collectors, to those who need to have everything.  Sigma use a very clean vinyl copy for the transfer, declicked and pitched corrected the LP.  In addition to mixing shows and years, the basic structure of the show is out of line since the Dark Side suite was played first but is on the third disc.

Pink Floyd’s performance itself is very good.  The Dark Sideportion of the show is in an early stage of development.  “On The Run” is the Gilmour/Wright jam, and “The Great Gig In The Sky” is really “The Mortality Sequence” complete with the ominous organ, the reading of Ephesians 5, and Malcolm Muggeridge.  There are no saxophones nor female backup singers to be heard anywhere.  The set begins well with a great version of “Breathe” and an energetic delivery of “Money”.

But there are some weak spots like the lackluster version of “Time”.  For the rest, there good latter day performances of “Atom Heart Mother” and “A Saucerful Of Secrets.”  Sigma do package this nicely in a fatboy jewel case and great artwork.  However, if the tape used on the vinyl were an improvement over the other sources this would have tremendous merit.  But as it is, this is good collection filler.