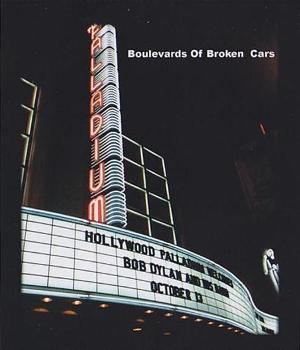 Bob Dylan played three shows at the Hollywood Palladium in October 2009.  Boulevards Of Broken Cars is a four disc set with two complete shows, a generous fragment of the third, and bonus tracks from the October 18th, 2009 Las Vegas concert presenting each unque song performed over these four days.  And as such, Dylan promotes him and his catalogue and, depsite Christmas In The Heart being released that day, plays none of the holiday material.

The Los Angeles Times picks up on this in a review of the first Hollywood show, pointed out:  “He ignores songs from his new album — that’s nothing new. Neither is his attempt to define himself through his changing set list.  “Bob Dylan opened his three-night stand Tuesday at the Hollywood Palladium, essentially in the backyard of his Malibu residence, on the same day his latest studio album was released. How many songs did he play from the new collection for the hometown crowd? Zip. Nada. Zilch.That’s not a huge surprise given that the album happens to be “Christmas in the Heart,” his first holiday collection.

“The fact is, he’s bypassed other new albums in concert before. Two decades ago he came through town just after “Oh Mercy” was released, but you never would have known it from his concert set list. The salient point being that the word “promotion” seems to be the one entry in the English language missing from his otherwise unabridged dictionary.  Instead, Dylan seems to treat the song selection at each night’s performance as something of cabalistic ritual, a mystical exercise in which something transcendent might emerge from the proper sequence and combination of thoughts, sounds, notes and rhythms on a given evening.”

Disc 2 (75:02) Thunder On The Mountain, Ballad Of A Thin Man, Like A Rolling Stone, Jolene, All Along The Watchtower.  Bonus, Hollywood Palladium, Los Angeles, CA – October 14th, 2009:  The Man In Me, Beyond Here Lies Nothin’, Po’ Boy, Sugar Baby, Cold Irons Bound, When The Deal Goes Down, Forgetful Heart, Workingman’s Blues #2

The recording for the October 13th performance is very good.  It’s very enjoyable albeit a bit fuzzy with a preponderance of bass in the lower frequencies.  It picks up right before the spoken introduction.

The Times review goes into detail in its review about this show, pointing out that “Dylan also weaved in “Shooting Star” from “Oh Mercy” and “Nettie Moore” from 2006’s “Modern Times,” songs separated by nearly two decades that look differently on romances of yore.  “Shooting Star” savors the sweetness of what once was, while “Nettie Moore” becomes immersed in the loss: “I loved you then and ever shall/But there’s no one here that’s left to tell/The world has gone black before my eyes.”

“His sly sense of humor came through in subtle ways. “My Wife’s Home Town,” from “Together Through Life” is savagely funny on its own — the hometown in question is Hell — but segueing directly from that wicked sentiment into “Stuck Inside of Mobile With the Memphis Blues Again” added extra sting to that bluesy lament from the mid-’60s.

“Many of the “Together Through Life” songs are rooted in the blues, a form his five-piece band excels at. Guitarist Charlie Sexton, who had been in Dylan’s touring band nearly a decade ago, has returned to the fold and reeled out some fat rhythm support and a couple of nicely stinging solos. Drummer George Recile supplied much of the instrumental magic on several numbers with consistently surprising rhythmic accents that kept the musical train jumping.

“And even though the momentum built inexorably toward the powerful finale combination that included “Ballad of a Thin Man,” “Like a Rolling Stone” and “All Along the Watchtower,” Dylan again defied any attempts for singalongs with his off-kilter phrasing of his signature tunes.

“He piled the words in the verses of “Rolling Stone” into the front half of each measure, then allowed for a pregnant pause before dropping the last few words in behind the beat at the end of the musical phrase. It’s as if he was going through that old enunciation exercise where you repeat a sentence multiple times, putting the accent on a different word with each repetition to see how it changes the emphasis in meaning.

“Meanwhile, from his station at the keyboard, he pounded out descending notes during “Watchtower” that created the impression of soldiers marching down a castle staircase on the way to carrying out their duties.”  The October 14th fragment is in the same sound quality as the 13th and has a great version of “Man In Me” to commend it.

Disc 3 (79:13) Hollywood Palladium, Los Angeles, CA – October 15th, 2009: Introduction, Gonna Change My Way Of Thinking, This Dream Of You, Things Have Changed, If You Ever Go To Houston, Rollin’ And Tumblin’, Chimes Of Freedom, Tweedle Dee & Tweedle Dum, Not Dark Yet, Most Likely You Go Your Own Way (And I Go Mine), My Wife’s Home Town, Highway 61 Revisited, Ain’t Talkin’

The third and final Palladium show has the same kind of sound as the others.  It’s a clear and powerful recording with an emphasis on the lower end.  Like the first night, the tape starts off with the introduction.  The opening numbers all stem from the last thirty years starting with 1980’s “Gonna Change My Way Of Thinking.”  This is rooted deep in his conversion experience, but it serves also to set the tone for the evening with its emphasis upon latter day songs.

In contrast to many setlists in the last couple years, a majority of the songs picked for this show are much more contemporary.  It’s almost an hour into the show until he plays something from the sixties with “Chimes Of Freedom.”  And then there is a quick return with “Tweedle Dee & Tweedle Dum”  and other newer songs.

A melodramatic “Ballad Of A Thin Man” is one of the older tunes receiving much exposure being played as the final song.  The three song encore of “Like A Rolling Stone,” “Jolene” and “All Along The Watchtower” has been almost standard for the past year.

The bonus tracks on disc for come from the Las Vegas show later in the week on October 18th.  The recording is distant and a bit distorted but clear enough to enjoy.  Notable on this night are the inclusions of “Forgetful Heart” and a gorgeous version of “Tryin’ To Get To Heaven.”

Tambourine Man utilize a standard fatboy jewel case with glossy inserts and a four fold insert with various photographs from the gigs.  They’ve been favoring the multi show set with last couple of tours with varying degrees of success.  Earlier in the year they focused upon the New York shows.  Now with Boulevards Of Broken Carsthey ‘re focused upon Los Angeles and overall this is a solid release.