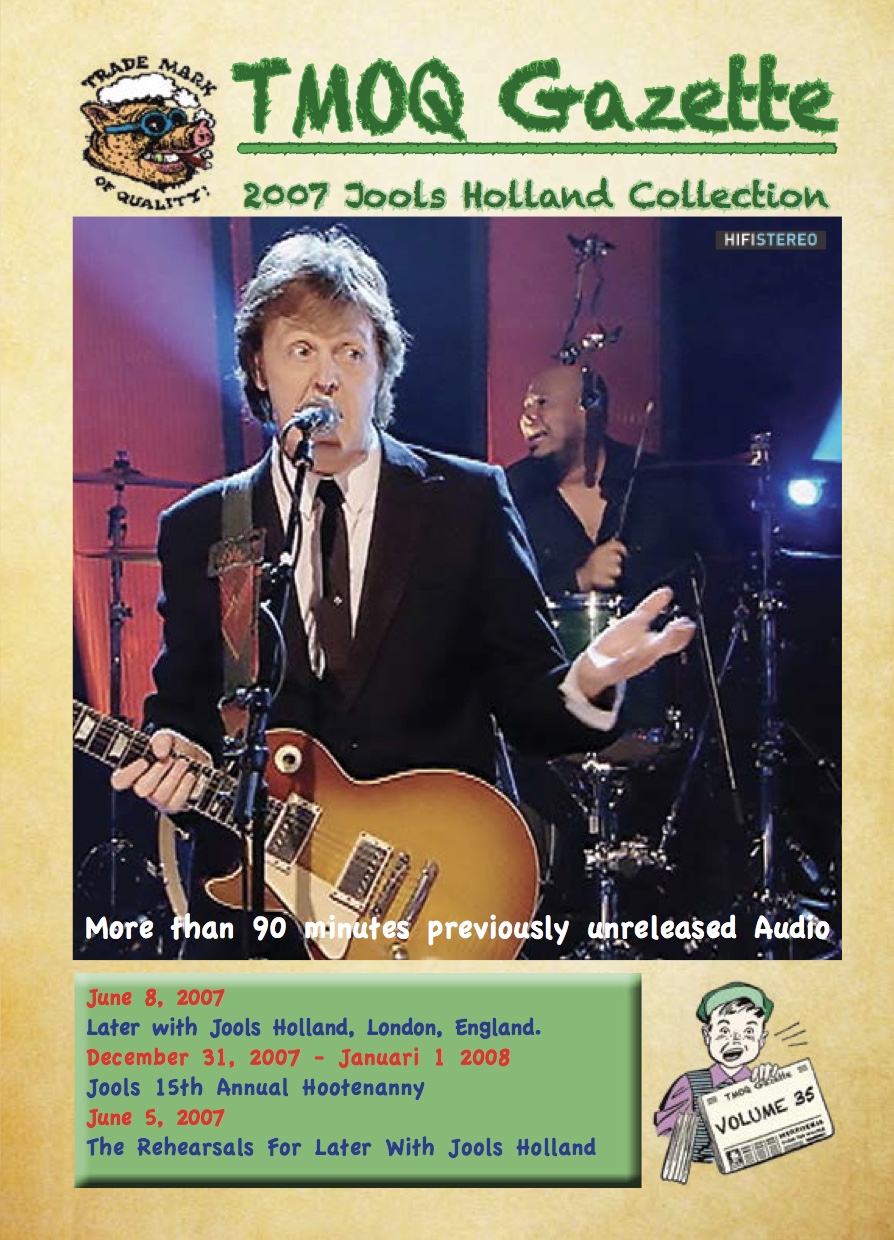 The Beatles were never a jam band, it’s understood, Macca’s latest incarnation are but even though you are, it doesn’t always mean you should. Maybe a little more context;
This release from HMC features some quality TV studio recordings from the taping of two Jool’s Holland’s hootenanny – An annual affair recorded in summer but presented on the BBC come the turn of the Western new year from around 11pm with the crescendo coming around midnight as the various attended artists ring in the New Year. Hogmanny 2007 / 2008 featured the collective musicality of Sir Paul McCartney and also the Kaiser Chiefs, Kylie Minogue, Kate Nash, Madness, Seasick Steve, Mika, Raul Midonand many more. The show also features the Pipes And Drums of the first Battalion of the Scots Guards as well as a cast of various famous and fabulous figures from TV, Stage, etc. invited to help Jools and the rest of the audience ring in the new year (Note to licence payers; this is where your money ends up – as free drinks for millionaires.)

Each of the attended musical acts are given a spot or three each in which to entertain and promote their ‘latest’ offerings (The album that was released that year or their breakthrough single) as the cameras pan around the room picking them up for their performance. It’s the cheapest way to enjoy yourself at home without the bother of going out to parties or clubs and, just like the events you’re trying to avoid, the guests there are already chosen for you by the host, like it or not.

Macca was there to promote his latest album, ‘Memory Almost Full’, not specifically his best album in the last few years, maybe the most ‘adult contemporary’ of his career (Aside; Not my favourite) but he at least had the decency to throw in some Beatles classics for the party. Where this two disk set centres is Paul’s performance – both on his own and as a couple of duets with his contemporaries. Also captured are some of the bands warm up rehearsals entering around the songs as they get the levels right. Pretty much the same thing was released on an Audiofön (The offshoot label to HMC) set in 2014 from a 2010 rehearsal. I deemed the release a success as it gave a rather neat little twist on what I’d heard before – that and Paul was promoting a ‘Band On The Run’ deluxe reissue so there were no issues in song selection. However, this release, I had less of a love for – sure, the main performances are great – Macca can still pull it out when he needs to and, despite any misgivings, he was a Beatle, so anything he brings new to the party, he will also bring some of his old back catalogue.

So, we know how the songs go, that’s all fair to say (Macca’s turns with Kylie and as part of the group jam are eminently listenable of course) – I was going to focus more on the rehearsals. They are, well, hit and miss. Knowing the bands propensity for ‘noodling’, it does make those jamming sections just a bit bloody tedious. We’ve all heard a film star introduced to the stage on a late night telly talk show though these filler segments last about 20 seconds or so, not 5 interminable minutes. Mainly, there’s no shape or form to them, you WILL find yourself fast-forwarding through until you find a half listenable part, you will be rewarded however when you get to the longer segments – The long rehearsal section for ‘I’ve Got A Feeling’ is great and has got a lot of, er, feeling, the strange little ‘Dance’ improv prior to ‘Only Mama Knows’ is the kind of thing that Paul is wont to throw out at these occasions, handy enough if you want everything that he happens to have recorded. Though you might not hear anything that you’ll have your frock blown up by and there are certainly no revelations, I found myself listening to these parts as you might a “Let It Be” sessions without the misery of being cooped up in a cold soundstage in Twickenham on a cold January Monday morning.

In the end; The performances that were broadcast are nice enough and, as far as I can remember, they haven’t been booted to silver before making them unique to collectors this way but, again, just because you can jam .. The rehearsals on the latter part of the first and some of the second disk can, politely, begin to drain the fun out it all.