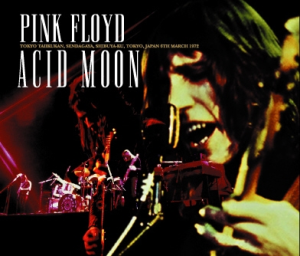 Disc 3 (47:20) From reel master recorded FM broadcast (Aired by FM Tokyo 1972) FM + Audience sources mixed & remastered:  Speak To Me, Breathe, On The Run, Time, Breathe (Reprise), The Great Gig In The Sky, Money, Us And Them, Any Colour You Like, Brain Damage, Eclipse, DJ Comments

Sigma has been very active of late to release every shred of tape in circulation from this legendary tour.  Acid Moon gives a much needed overhaul and re-evaluation of the March 6th show.  This is the first of the six night tour and the debut of Dark Side Of The Moon in Japan.  The label collects together two sources on the three discs:  the audience tape of the entire show on the first two discs and the partial radio broadcast on disc three.

The audience tape is slightly dull but clear and loud enough to be enjoyed.  It was pressed many years ago from a high generation copy on Water’s Gate (TNT-940147/148).  The hiss on the tape is louder than the actual music.  This is one of the most hated bootlegs ever produced.  A second silver pressing can be found on Live In Tokyo 1972 (Amsterdam AMS 9616-2-1/2) which represents an improvement over the TNT version.  Sigma is a remarkable upgrade over the older titles.  Coming from a low gen, the music is much clearer and while there is still hiss present it is very low down in the mix to be almost inaudible.  The only damaging cut in the show is between “Money” and “Us & Them” which loses a few seconds of music.

Disc three is an edit between the FM broadcast and an audience tape.  The radio tape runs only from “Speak To Me” through the beginning of “Us & Them.”  The tape has been issued before, most recently on Dark Music  (Sirene – 118) which has the radio tape only.  Sigma claim to use the DAT clone of the reel master for this release.  Regardless of the source it does sound really good.  It isn’t taped professionally as most radio recordings are.  It was probably taped on stage with very good equipment, but one shouldn’t expect a pristine, well balanced soundboard recording on disc three.

Two weeks seperate the end of the European tour and the beginning of Japan, yet the lay off really affected the momentum gained in the first couple months of the year regarding their new piece.  The first half of the program, devoted to the new piece Dark Side, is very sloppy and uninspired.  Granted they tinkered with arrangements throughout the year, but the first Tokyo performance lacks the cohesion and spark of later performances.  It is evident early on with a stale run through of “Breathe” and leads into a quiet “On The Run.”

“Money” likewise has a very quiet beginning, sounding as if the band were learning how to play it again.  Roger takes command of this performance.  The track does turn out well even though Gilmour misses a cue in the lyrics.  “Us & Them” sounds technically proficient, but things pick up with a spirited “Any Colour You Like.”  Roger comes in too early for the first verse of “Brain Damage.”  He also forgets the start of the second verse, singing “the lunatics are in my…” forgetting that the lunatics are in the hall.  There is a majestic ending for “Eclipse” and the audience give them a big applause.

The second half of the set is much better.  “One Of These Days” is simply devastating in this recording with Gilmour’s slide emphasizing the insanity of the piece.  “Careful With That Axe Eugene” is introduced as “a golden oldie” before they deliver a well throughout version of the piece.

“Echoes” is the true highlight of the evening.  In twenty-five minutes they run the gamut of styles and emotions which leaves the audience breathless.  The only encore is a thirteen minute running of “A Saucerful Of Secrets.”  Unlike many tapes from this era this is complete with all the sections intact.  Acid Moon on the whole is another sterling production by the Sigma label.  The March 6th show has been neglected for so long by the silver labels.  It is good to see it receive the care and attention that it deserves since, even though it isn’t the best performance by the band, it does hold historic import in Pink Floyd’s live history.  The packaging is up to the high standards set by the label and is limited to two hundred copies.