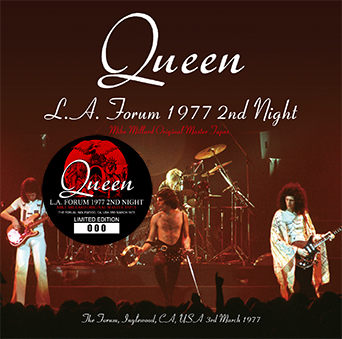 We continue with the first of many new-to-the-world Millard recordings, this one capturing Queen on the U.S. tour in support of A Day at the Races. Queenlive.ca lists a partial extant recording of this show, but the version of it on YouTube is clearly a different performance (most likely the night before, March 2). It appears Millard’s recording never circulated beyond his friends if that, as no first generation copy is known.

The Queen master tapes were among the first batch of cassettes Rob transferred to DAT himself in the early 2000s. While we don’t have the master cassettes, the analog transfer to DAT was done well. The azimuth alignment and phase are both solid.

Incredibly, Mike himself only rated this recording Fair, and nothing could be further from the truth. His tape of this fine Queen performance has all the attributes of his best work: up close, full fidelity, clear instrument separation and little annoying audience interaction, though make no mistake the crowd is extremely excited to see Queen. It stands comfortably with the Mike titles we know and love. Samples provided.

Millard’s dear friend Jim R was with Mike at the show and shot the original unpublished photos we are fortunate to include with this release. Here’s what he recalls:

Mike and I attended the Queen concert on March 3, 1977. I pushed him in the wheelchair.Hard to believe in hindsight, but at the time, Queen was considered a Led Zeppelin copycat. So, being loyal LZ fans, we planned to “boycott” the show. But upon hearing the buzz about the upcoming concert and with some prodding from friends, we both decided to attend. At the last minute we scored 15th row center seats on the floor. Not in our desired sweet spot (5th row center) but they would do.

Our seats were on the aisle and there was a crush of fans at the start of the show. This caused extra security in our aisle. We were in section B, the center section on the floor next to the stage, Section B contains 25 rows. About halfway back, two security members sit in chairs in the middle of the aisle. With Mike and I sitting 15 rows back on the aisle, this put the security practically next to our seats. Yikes!!!

The show had decent sound and good lighting. Thin Lizzy opened and I took a handful of pictures of them. Freddie wore three outfits during the show, a white, a black and one with red and white stripes. The encore was sizzling with “Jailhouse Rock” and a bit of Elton John’s “Saturday Night’s Alright For Fighting.”

This is the build up to this wonderful release that documents a previously unknown Mike Millard recording, yes a new Millard recording that has not circulated! Oh yeah, it’s also a transfer done from Mike’s original master tape! Wardour has long been known for focusing on Queen’s unofficial live history so it’s fitting that they were the first label to release this important document, of course with a tape of this quality they are not the only ones as Los Angeles Forum 1977 (Shakuntala STCD-220/221) was released a short time afterwards. Mike used his Nakamichi 550 Cassette Recorder and AKG 451E Microphones (CK-1 cardioid capsules), the same gear that he would use three months later for his incredible Led Zeppelin L.A. Forum recordings so we know what to expect for this Queen tape.

The sound is excellent and typical for a Millard recording, as you read in the notes that accompanied the original torrent Mike and Jim were 10 rows back farther from their prime taping spot and you can hear it in the recording itself, you get the slight bit of distance vs recordings done in the 5th row. There is a small amount of tape hiss and for the first two songs there is some crowd noise near Mike as described by Jim, the audience were in a frenzy to see Queen! Once they settle in the recording becomes what have come to expect from a Millard master, while not up to the standards of the Zeppelin 75 or 77 tapes, if they were an A, this would be an A minus. The recording is also incomplete, apparently they either ran late or had issues getting set as the intro music and first few seconds of the opening song, Tie Your Mother Down, are missing. There is a tape flip at the end of Brighton Rock cutting the very end. The balance is perfect with all instruments and vocals being clear and defined in the mix with a wonderful full range of frequencies, this is one to crank up the volume on.

The recording begins about 20-25 seconds into Tie Your Mother Down, the first thing you hear Freddie sing is “Got my timing right, Got my act all tight”, as stated the sound is a notch down, lots of crowd cheering and clapping but soon begins to improve. I am guessing Mike may still have been adjusting his position and equipment, a minute and a half in it has already drastically improved. Being 15 rows back actually gives more of the Arena and audience ambiance, something that really helps bring the experience alive, the audience is ready for Ogre Battle, like many groups of this period Queen understand the importance of hitting the audience straight away with a one – two punch. During his introductory speech Freddie thanks the audience for filling the Forum for two dates and introduces an elegant White Queen (As It Began), this is the first song that we can fully appreciate the sound, from the onstage amplification and Millard’s equipment it is audio perfection.

Freddie leads his choir (band mates) to replicate the gospel like harmonies of the studio version, Roger Taylor’s high vocals are in perfect compliment to Freddy and Brian. The medley has been updated since the previous year with Millionaire Waltz and You’re My Best Friend added, it’s not as strong as the former and drags a bit, the tempo is back for Somebody To Love and a rousing version of Bring Back That Leroy Brown. At the medley’s end Freddie toasts Los Angeles, is it a pink sparkling or blood? Sweet Lady brings a harder Rock edge back, great riff and playing from Brian May on this one, he gets his solo spot on the Echo Plex laden Brighton Rock. The middle section is really good, he gets into some Space like tones then weaves some leads over it just prior to a bass and drum jam, the timing of melding the echoed tones is amazing. The acoustic ’39 brings an intimacy to the proceedings and is perfectly captured in this recording.

You Take My Breath Away is complete “contrast” in the words of Freddie to White Man, the latter featuring an effects laden solo vocal section that leads into Prophet’s Song, very heavy stuff Roger’s drumming is incredible. The big hit Bohemian Rhapsody is a big crowd pleaser and a decent version, the follow up Stone Cold Crazy is much better, fast and almost brutal! Again Brian hits the Echo Plex for a great solo, I thought Metallica played this fast, they’ve got nothing on this! It’s all Rock n Roll from here on out, Keep Yourself Alive gets the audience on their feet and clapping, Liar features a cool drum intro and flows well, a bit jammy for Queen giving them a chance to stretch out in a good way. The brilliant In The Lap Of The Gods…Revisited ends the set is a dramatic fashion. Now I’m Here is the first encore and gets the audience in a party mood and readies them for the Rock and Roll medley, Freddie vamping it up gets the audience frenzied and the fast paced Jailhouse Rock lays waste to the crowd, they incorporate Elton John’s Saturday Night’s Alright For Fighting and a bit of Shake, Rattle, and Roll and B Bop A Lula in for good measure bringing a fabulous ending to the concert.

The packaging is typical for Wardour, full color inserts with pictures from the tour and on the inside cover there is a picture from the actual gig that was taken by Jim R that gives a great perspective of their seats. In what can only be described as a mistake the label includes four thumbnail pictures from a 1978/79 concert as Freddie has shorter hair and mustache and Roger’s drum riser is lighted. There is a picture of Millard’s ticket stub, shame they only used the front side, the back side shows “Queen + Thin Lizzy” in Millard’s (?) handwriting and let’s not forget picture CD’s and numbered sticker. Nonetheless this is a great release, I have been following these Millard torrents for some time now, there is a lot of insight gained about Mike the taper and a little bit about Mike the man. Wardour has left the sound alone from the original torrent, no need to over produce or mess with what is already right, for Queen fans and Millard enthusiasts this is another must have.